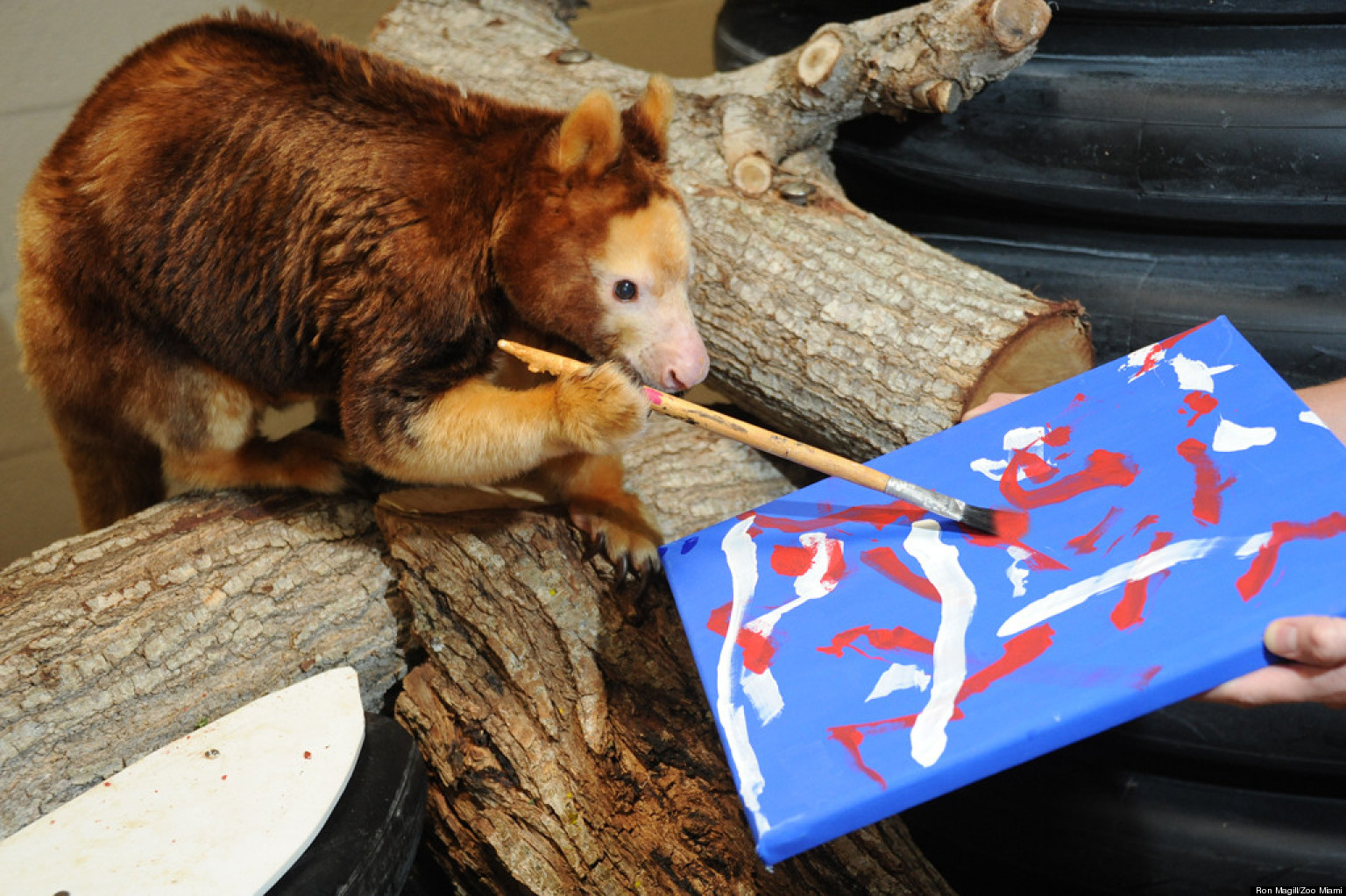 Posted at 16:17h in Marc's Blog by Jen Hinitt
Share

It all started back in the1950’s when a young chimpanzee named Congo was handed a pencil and some paper – suddenly, a star was born. Congo went on to create some 400 works in a style labelled ‘lyrical abstract impressionism.’ Picasso and Salvador Dali were impressed by the masterful monkey, and even today, you’ll find the ‘sophisticated’ paintings of Congo the chimp selling at auctions alongside the likes of Andy Warhol.

I guess it’s no real surprise that primates, our nearest relatives, might create art.

Take Towan, for example, a 41-year-old orangutan from Woodland Park Zoo, Seattle. An internet sensation back in 2008, a couple of his original paintings fetched close to $2,000.00 at auction. Apparently all orangutans like to paint, but unlike all his other furry friends, Towan does it with a brush – instead of his tongue. Good move I’d say.

And you may remember Cheeta – the famous chimpanzee who starred with Tarzan on our screens quite a few years back? Like many movie stars, Cheeta, at 76 years old, retired in a luxurious sanctuary in Palm Springs, California, where he thumbed through books, played the piano, and yes…you guessed it… painted abstract works.

So, whether it is with paws, jaws, hooves or snout, the natural world is filled with creatures able to express themselves through art. In fact, we’ve seen some true legends emerge from the animal kingdom.

Perfect example would be Cholla, the painting horse from Nevada. Working on a sturdy easel, Cholla showed ‘awareness, intention and pleasure’ when choosing colour, painting abstract strokes, and using his tongue to determine the preferred brush angle. Original watercolours by Cholla have featured in art exhibitions across the planet, and he is now considered one of our most sought after animal artists – right up there with Congo, our champion chimp.

And lately I’ve learned about the painting prowess of rabbits, raccoons and rhinos; dolphins, ducks and dogs.

Then of course, two piglets known as “Van Snout” and “Bottabelli” couldn’t help themselves one day and got stuck into a few cans of paint on a U.K. farm. Next day, they’re celebrated artists in high demand with paintings steadily increasing in value. Farm owner Chris Murray admits “We think of them as our little Pigassos.”

This has all left me wondering – who’ll be the next furry critter to pick up a beret and a brush?

Turns out it’s the elephants who lead the charge into artistic stardom, with artworks via schnozzle now widely available in zoos, museums and galleries around the world.

Indeed, it’s the elephant’s dexterous trunk that gives an ability to grasp a paint brush and execute fine motor movements. Plus remember, elephants are extremely intelligent.

Consider Ruby – the original elephant star. Born in Thailand in 1973, her painting career began when zookeepers saw her scratching in the dirt with a stick. They offered her a brush and paints, and, with a keen sense of colour and composition, Ruby’s paintings went on to sell for as much as $50,000.00. Well done that elephant!

Here’s hoping then, that she would often find herself knee-deep in a sea of boutique bananas.