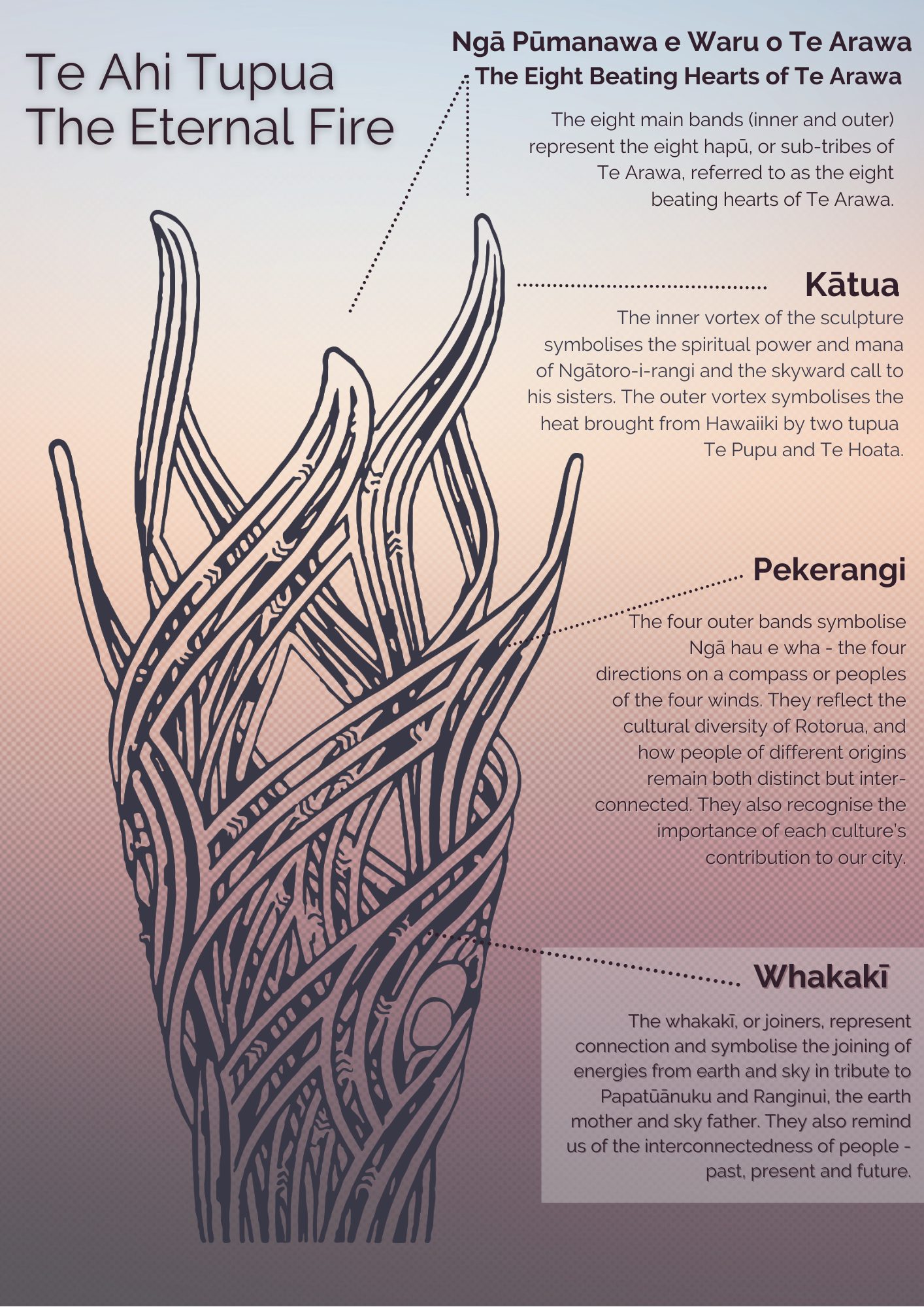 Posted at 09:51h in Art, Blogs by Jen Hinitt
Share

In 2015, Rotorua Lakes Council and Waka Kotahi NZ Transport Agency agreed to enter into a partnership to commission a large-scale artwork to become the centrepiece for upgrades to the intersection of State Highway 5 and 30, the roundabout at the southern entrance to Rotorua.

According to Waka Kotahi NZ Transport Agency’s Urban Design Guidelines for roundabouts, landmark features (large scale public art, feature lightings etc) can help with wayfinding and enhance local identity. Public art can be successfully integrated into the design of highway corridors and deliver many benefits. Public art helps to create a sense of arrival and can be a memorable event along a journey. It often tells an important story which bolster’s local community identify and sense of pride.

In November 2015, Council put out a call to artists across Aotearoa for expressions of interest to produce the artwork. In the first two months of 2016, an independent panel narrowed down the 13 expressions of interest received to five concepts. In April 2016 the panel unanimously selected the design submitted by New Zealand Māori Arts and Crafts Institute |Te Puia.

Following initial challenges in finding a contractor to construct the sculpture from steel, Kilwell Fibretube approached Council in December 2017 with a proposal to build Te Ahi Tupua from composite materials. This is a world-first for a piece of art of that size and shape.

The first part of the process, the 3D printing, began in March 2018 and assembly of the helix segments started in April 2018.

Te Ahi Tupua means The Eternal Fire – representing the divine that burns within all of us.

Te Ahi Tupua portrays the Te Arawa legend of how Rotorua’s geothermal area came to be. It also incorporates elements of navigation, education and the people of the area – past, present and future.

Inspired in part by camera footage captured from deep within the world famous Pōhutu Geyser, the design pays homage to its rich natural features – the vortex reflecting different forms of geothermal energy – steam vents, heat, flames and eruption. Inspiration also came from the Māori concept of kaitiakitanga o te whenua – guardianship of natural resources. This concept signifies the importance of caring for our environment, and how care of the land is handed down through generations.

A team from the New Zealand Māori Arts and Crafts Institute, with expertise in wood and stone carving, developed the concept, before a detailed design by Stacy Gordine was chosen. Drawing on three decades of experience, Gordine then led the design project.

Soaring 12m into the air, the sculpture’s skyward reach acknowledges the pursuit of education, learning and knowledge. The sculpture also embodies navigation and travelling, both ancient and modern, through the tohunga Ngātoro-i-rangi’s explorations of the Central North Island, connections with other areas and tribal groups, and the warmth of hospitality, or manaakitanga, shown to visitors.

The Legend of Geothermal

Te Arawa is a confederation of tribes living in the Waiariki region of Aotearoa New Zealand. Their ancestors arrived between 600 to 700 years ago on a waka (canoe) of the same name, Te Arawa.

Arriving at Mount Tongariro, he was caught in a blizzard and in desperation called for his sisters in Hawaiiki, Kuiwai and Haungaroa, to save him. The pair filled six baskets with glowing embers and sent forth, Te Pupu and Te Hoata, the subterranean goddesses of fire, to deliver the baskets of heat. The pair plunged deep into the earth travelling to Aotearoa. Embers were left behind where they surfaced – Whakaari (White Island), Moutohorā (Whale Island), Rotoiti, Tarawera, Rotorua, Ōrākei Korako, Wairakei, Tokaanu, and finally Ketetahi at Tongariro – with just one precious kete of fire left to save Ngātoro-i-rangi.

Today, the path travelled by Te Pupu and Te Hoata is recognised by a string of geothermal features at the points where they surfaced. This geothermal trail recounts Te Arawa’s first arrival in Aotearoa, and memorialises historic connections.

The first step in the process was converting the design to a digital format to enable 3D printing to begin. Victoria University digital design lecturer Derek Kawiti conceptualised the sculpture and converted it into a digital format. Derek and Gurit Composite Engineering then broke the image into individual files to enable Kilwell Fibretube to print them on their Raise3D N2 printers.

The internal structure is built from more than 1200 interlocking 3D printed cylinder blocks. The blocks are made from Polyactic Acid (PLA), a thermoplastic often derived from renewable sources such as corn starch or sugar cane. More than 262kms of PLA material was used during printing. Each block is unique like a fingerprint, and when connected, fit together to create the long curved sections that gives Te Ahi Tupua its shape.

The unique shape of each block was essential to maintaining the curved design. The interlocking keys on the end of each block were printed to a precise degree to ensure that, as they were connected, the curve of the entire length followed the correct pattern.

The 3D printing process took in excess of 17,000 hours with the printers working 24/7 for over 6 months to complete. This required staff to check the printers twice a day to swap over filament and remove completed pieces as they took between 7 (for the inner helix) and 19 hours (for the Outer Helix) to print

Once printed, the 3D printed sections blocks were glued together to create short three metre sections. Those sections were then fitted with a carbon fibre sleeve and cured with a layer of epoxy resin to seal the 3D printed surface. . Several of these sections were then joined together to form the full 12 metre lengths. Each length was then hand-wrapped in layers of carbon fibre and fibreglass material. After every five layers were applied by hand, the sections were vacuum infused with epoxy resin (to draw the resin through the composite layers). To achieve the desired structural strength certification, Kilwell repeated this process until each piece of the sculpture had between 12 and 20 layers of material and resin surrounding the inner 3D printed core.

The use of carbon fibre meant that the sculpture would be incredibly strong while remaining relatively lightweight for its size. Carbon fibre and fibreglass material is also easily manipulated which helped to maintain the natural, curved design as the sculpture was developed.

Testing
During the construction of Te Ahi Tupua, Kilwell Fibretube worked with Scion NZ to test the structural integrity of the sculpture. Testing involved replicating sections of the sculpture and using a 60 tonne press to essentially tear those pieces apart to measure the force at which the material would break apart. Te Ahi Tupua is built to withstand wind speeds of up to 175km/hr, a category five hurricane.

There is no other sculpture of this size and shape that has been constructed from 3D printed material and hand-wrapped in layers of carbon fibre. During construction, there were many challenges that Kilwell had to overcome with no template or guide to look to. Kilwell Fibretube, with guidance from Gurit Composite Engineering, devised innovative solutions and worked through periods of trial and error. Kilwell was able to harmonise the need to create a structure that was physically achievable, and structurally sound, while maintaining the original design and concept of Te Ahi Tupua.