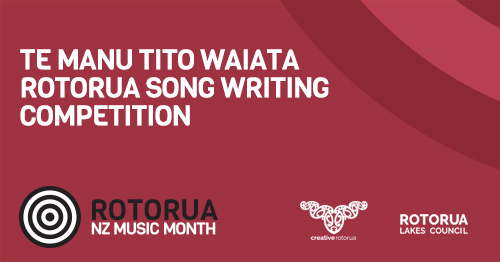 In the lead up to New Zealand Music Month (May 2021) locals had the opportunity to enter Te Manu Tito Waiata Song Writing Competition, designed to recognise and showcase some of the incredibly talented people in our community who are creating original songs.

This year Desian Robb took out the top spot with his Song for Mum, receiving the $1,000 prize and the opportunity to have his work professionally recorded.

Listen to ‘Song for Mum’ by Desian Robb

When hearing he had won this year’s competition he was over the moon. “It’s awesome. It’s made my day,” he said.

“I’ve been writing songs since I was 10 years old, playing guitar since I was 12 and playing around with Fruity Loops producing my own music since 2006,” he said.

Part of the prize this year is to have the winning song professionally produced and Desian is excited to get feedback and input from an outside perspective.

“The winning song really stood out for its hooky melody. It has a good feel, creating an entity within itself. It’s instantly memorable”, says Michael.

“It’s great that people put pen to paper, putting their heart and soul into song form. Listening to all the entries gave me a huge sense of pride in our community”, he says.

“There was a huge variety of songs this year, reflecting the diversity of our community. Every song told a story, not only about the writer but also one that resonated with me”, says Mercia.

The judges felt two other songs also stood out, and decided to award second prize of $500 to Nikau Chater for her song You Be You, and third prize to Mike Hastie for his song Wild Love. Both will have the opportunity for a professional development session with Michael Barker.